There’s been a lot of discussion about public sector salaries over the last few days, and in particular about consultant salaries. A revised salary scale has been proposed for all newly appointed consultants, raising the starting and final salaries significantly. At the same time there are pre-budget murmurings about raising public sector salaries again. I am, of course, a public sector worker, so I am not entirely disinterested in this. My 2c are that if any public sector salaries are to rise, this rise should be confined to the lowest paid workers. People like me, on high salaries, ought not to be getting a sniff of a salary rise for several years to come.

Leaving that to one side, I want to look at the evidence on consultant salaries. I am a doctor, but I’m not a consultant. I’ve worked in hospitals for quite a few years, although not recently, and I spent a lot of time as a patient a few years back. I also work with quite a few consultants, and trainees (i.e. non-consultant hospital doctors) on various research projects.

The question being asked is simple enough. Are Irish consultants well paid, or poorly paid, by comparison with their peers? The context is two-fold; first, there is a really serious problem getting people to apply for and accept consultant posts in Irish hospitals; second, consultant salaries were cut quite sharply, like most other public sector salaries, between 2009 and 2013.

What is the evidence? The main source is the OECD Statistics database. The OECD collects a lot of information about various aspects of the health services in their member states, and they put a lot of effort into making these as comparable as possible. They collect information on the incomes of medical consultants (Health -> Health Care Resources -> Remuneration of health professionals). For Ireland, the OECD only collects information on the salary of consultants, not on their private earnings. These earnings are quite substantial, a point to which I will return. The OECD presents this information in a number of ways, each of which tells a slightly different story.

First a caveat, while the OECD does a lot of work to make these figures as reliable as possible, there are still big problems. All the data are averages, so you can’t compare pay-scales directly. The pension levy is not deducted from the Irish salaries, but it is definitely deducted from the take-home pay. The salaries exclude private practise income, which varies hugely. No data is collected on the up to 500 (or so) fully self-employed private consultants in Ireland. UK data may not properly account for merit awards. What is classified as a consultant in one place, is not necessarily a consultant elsewhere. In a word, these data are usable, but not necessarily always right.

I’ve done a series of graphs, each of which I will discuss separately. In each of these graphs each country has a different colour. Those self-employed( dots) and those on salaries (solid line) are drawn with different types of line. Ireland is always shown as a solid line with large dots added, and this line is labelled as well.

Specialist incomes as a proportion of the average wage 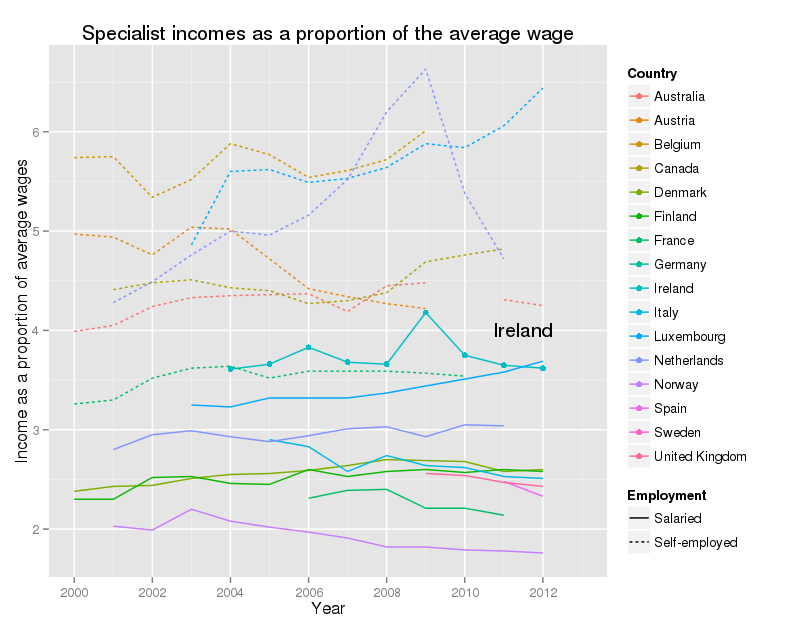 This graph shows, for a wide range of OECD countries, the incomes for salaried and self-employed consultants, as a proportion of the average wage, from 2000 to 2012. For Ireland in 2012, this figure was 3.65, so in that year an average Irish consultant earned, from their salary alone, more than 3 and a half times as much as an average Irish worker. Irish consultants are towards the top of the salary scale. Their actual salary fell sharply, but so did everyone else’s, so the proportion is pretty flat. The other thing to notice is that self-employed consultants make far more money than salaried consultants. There are issues with accounting fully and properly for their costs in running the practise, but the overall message is pretty clear. Note that there are no data on private income for Ireland.

Specialist incomes in US$ at purchasing power parity 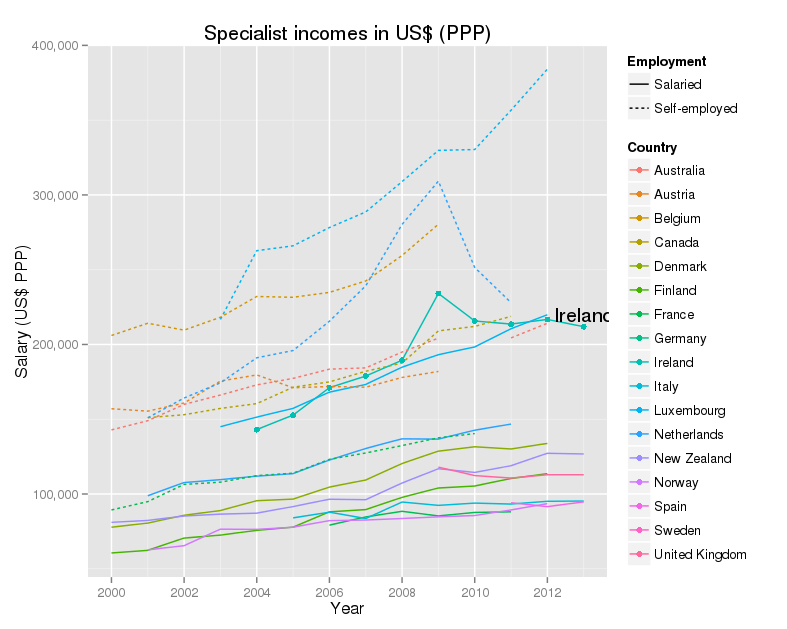 A different way of looking at the same figures is given by using a common currency. In this case the OECD use what are called “US dollars at purchasing power parity”. The idea is that money, even in a common currency, is worth less where the cost of living is high. OECD calculates a rough equivalent, between countries, and over time, for the amount of money that will buy an equivalent lifestyle, allowing for these varying costs. The story this graph tells is very similar. Irish consultants do well, coming at the top of the salaries with their colleagues in Luxembourg. Self-employed consultants do better. 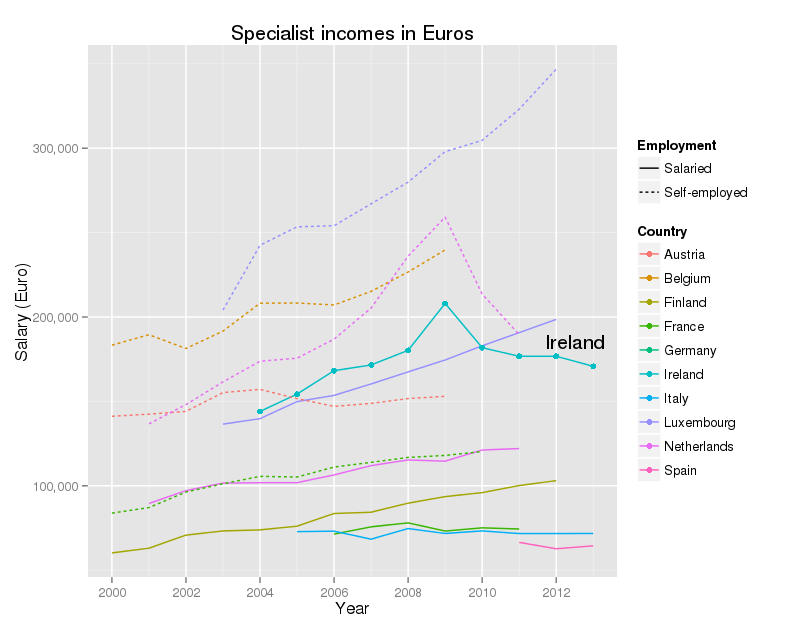 US dollars at purchasing power parity are all very well, but not exactly familiar. Euros are probably more useful for most of us. This graph shows the data for the Eurozone countries only. The picture is very similar to the previous graph.

What does all this tell us?

Allowing for the limitations of the data, I do not think that one can argue that Irish consultants are underpaid. I do think that they deserve high salaries – being a consultant is a tough job, with long hours and heavy responsibilities. Part of the confusion is that the salaries of Irish consultants are being compared with the incomes of self-employed consultants in other countries. Their salaries are notably lower than the incomes of self-employed consultants in other countries, but this is what you would expect.

What isn’t known, as far as I know, is the total income of Irish consultants. It is known that the private insurance companies pay about €360 million annually to the consultants, but, again as far as I know, there is no information on their office fee income, nor on the other costs that have to be met from this income (e.g. rent, office staff and so on), nor on how these fees are distributed (there is enormous variation in the private practise incomes of Irish consultants). It would be useful to have these figures.

The figures we do have suggest a need to ask a very serious question. Given that the salary covers only a proportion of the income of our consultants, how much should they receive, in total, as a fair compensation for their difficult and challenging work? I don’t have an answer for this, but I think that there is a real need for a careful, objective discussion of the topic. Consultant salaries are a sizable proportion of our total health expenditure, and we have to make sure that we are getting value from this spend.

My other question was “why is it so hard to recruit people for consultant posts in Irish hospitals?” As far as I know, no-one really knows, although there is a study going on at the moment. Pending the results of this work, there may be some clues in the latest Medical Council report on the medical workforce. Striking features are high rates of withdrawal from the register for younger doctors, and a very high proportion of doctors (1 in 3) who qualified outside Ireland. None of this suggests a service that is very attractive to its own.

Talking to colleagues over the last few years, the impression I have is that many people are unhappy about coming to work in Ireland. Some points people have made to me :-

Nonetheless salary cuts matter – I was enlightened by a colleague who drew my attention to the final report of the Strategic review of medical training and career structure. One of their recommendations (page 81) is :-

“The Working Group recommends that the relevant parties commence, as a matter of urgency, a focused, timetabled IR engagement of short duration to address the barrier caused by the variation in rates of remuneration between new entrant Consultants and their established peers that have emerged since 2012.”

I gather this was based on strong representations from trainees who met with the group, who intimated that the salary differential (of 30% between new entrants and existing staff) was the main factor, though by no means the only factor in their decision making.

So salary cuts do matter. It is possible that the new salary scales will produce the desired flood of people applying for posts in our services. I certainly hope so. However, I remain of the view that we need to fix many other issues in our services as well, if we are to keep these people working here, and have a decent and affordable service.

Colleagues, who had better remain anonymous, unless they wish to comment below, have very helpfully critiqued my observations. I appreciate this. I have a better grasp of the limits of the OECD data, and have found work on the attitudes of senior trainees to the lowered salaries for new entrants – their views were very negative. I was wrong to argue that salary cuts were relatively unimportant – they were (and are) important, but still not the whole story.

The OECD presents the earning figures in one further way, by comparison with GDP per capita. This is a very rough guide to the wealth of a country. Because Ireland is the home to a large number of multi-national companies, with very large exports, Irish GDP is not regarded as the best guide to the size of the economy. GNP is preferred. The CSO publish GDP:GNP ratios annually, and the latest published is for 2012. The ratio has fallen from about 0.85 in 2004 to 0.81 in 2012. I’ve assumed that the figure for 2013 will be similar. I’ve calculated the salaries of consultants as a share of the per-capita GNP, and added this to the graph. 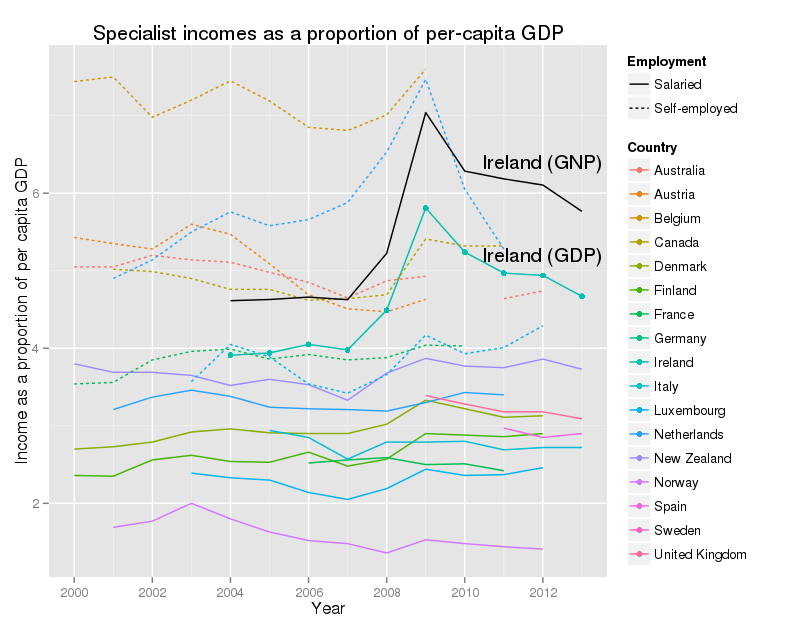 This shows a similar story to the other graphs, with one interesting twist. What is very noticeable is that Ireland is now much further up the rankings, both for GDP, and especially for GNP. This says, that relative to the wealth of the country, our consultants are well-paid. Again this excludes their private incomes. The peak in 2009 reflects the collapse in GNP, and not a rise in consultant salaries.

One comment on “Consultant salaries in Ireland – some evidence”