Our nearest and dearest neighbours are engaged in leaving the European Union.  For Ireland, the experience may be less like the neighbours moving, than them moving, taking their house, garden, the road outside, and possibly the party wall, as they head off to roam the world. As a result, like most other EU countries, Ireland is spending a lot of time on damage limitation. There’s been a good deal of attention paid to key sectors of our economy, agriculture, and finance, and our politics, notably the rights of Irish citizens in the UK post-Brexit, and the Northern Ireland peace process. I suggest that we need to look at some other sectors of our society, and I’m going to explore some of the possible impacts on health and social care. Together with the DCU Brexit Institute, I’m running a meeting in the City West Hotel in  Dublin on May 3rd next. Tickets are free from EventBrite, but you are asked to book in advance.

Nick Fahy and colleagues have written a paper in the Lancet  which looks at three possible scenarios for Britain. They describe these as a ‘soft Brexit, hard Brexit, and failed Brexit’ respectively. These are respectively a deal similar to the EEA,  a deal similar to CETA, and no deal, with WTO terms of trade. None of these is particularly cheerful. They have chosen to use the WHO Health System Framework (See figure) for their analysis, and so am I. 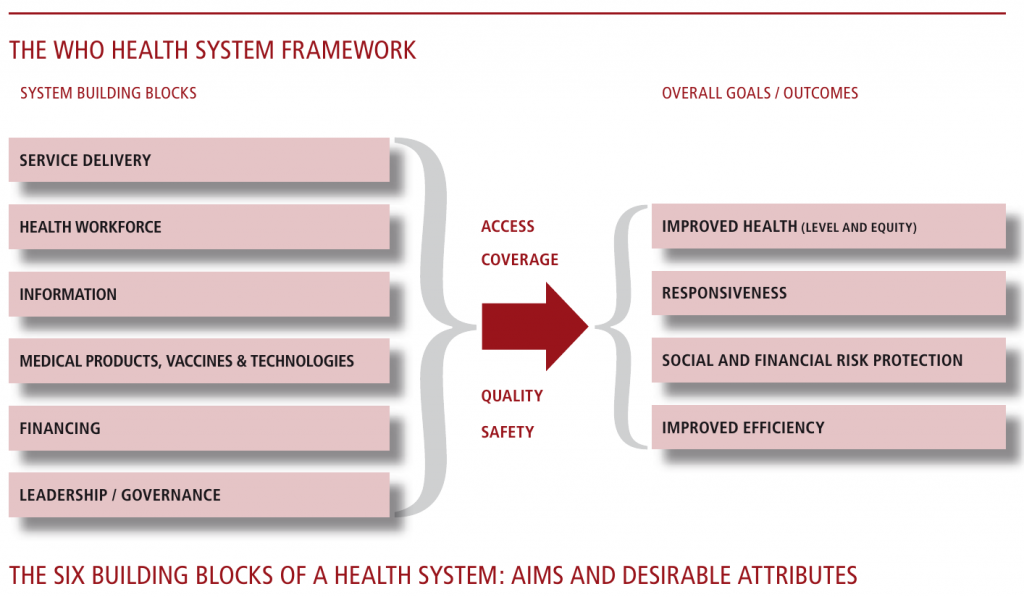 For the UK, Fahy and his colleagues find little to cheer about. Working through each of the six building blocks, only two positives emerge – it might be possible to improve regulation of professionals, and it might be possible to improve working conditions for staff. I think it would be fair to say that the authors are by  no means sure that any of these benefits will happen.

For Ireland, things are more complex. We are not leaving the EU, but we will be more distant from the UK than at present. Working through the building blocks, and following Table 2 in their paper we get :-

The economic impacts of Brexit have been well studied. Ireland’s physical exports are dominated by medicines and medical products, and the effect of Brexit on these will be significant. However, there are other health sector impacts of Brexit, and some of these have been discussed here. There are doubtless more.

These problems by not insuperable. The challenge is that health is nowhere near the top of anybody’s Brexit agenda. There is a risk that nothing will be done in time to mitigate these risks. Earlier this month, the ECB and the Bank of England set up a joint task force to keep the financial markets running, should there be a hard Brexit. Perhaps we need something similar for the health sector?