I’m just back from the Patients First meeting in Navan. This is their third meeting, but the first I’ve been able to get to. Their core goals of the campaign are :-

There was a respectable attendance, with about 40 people there, in the Newgrange hotel. The audience was a mixture, with several nurses from the area, including Navan hospital, and the local hospice team; a scattering of politicians (full list on their website) including TDs Helen McEntee and Regina Doherty; a couple of people with specific stories of bad outcomes; and several other local people. The speakers were my old friend Hilary Dunne of Patient Opinion Ireland and Karen Clarke from the INMO and Drogheda. David Hughes of the INMO chaired the evening.

The format was interesting. It started with a video from the BBC about the Francis inquiry into the Mid-Staffs trust disgrace. I re-read the executive summary over the weekend, to prepare for this evening. It still shocks and upsets me. I’ve been ill and helpless in hospital in Ireland, more than once, but I always got great care. I might not have been so lucky over there. If you haven’t read it, please do.

Then Hilary and Karen spoke briefly, presenting their personal perspectives on the issue. Stephen McMahon, and Steve Tweed, who were meant to speak as well, were caught in the tailback on the M50/M1 junction, and didn’t make it over. It was passed over to the floor then. There were three patient stories, one from the patient themselves, and two from relatives. Several other people, including the local councillors and TDs spoke as well.

What did I think? This was a genuinely useful meeting. The patient stories are a powerful narrative, and serve to focus attention on why we need to reform the service. The response of the politicians was very positive and constructive. The two TDs will be going back to Minister Varadkar, and one hopes that he will take their feedback seriously. There is the nucleus of a group here to lead the wider discussion on the structure and funding of the services, which I think is needed. The patient centred approach, and the explicit recognition of the importance of patient’s voices are a huge benefit to any further policy discussions.

A good evening, and congratulations to the organisers.

If you know me, you will know that I am not the most dexterous person. I was never going to have a career as a surgeon. I read a paper some years ago that gave me hope that I might yet improve (not that I might take up surgery). I vaguely recollected that the authors had shown evidence of unexpected brain plasticity in older people, by documenting structural changes in the brain after teaching people how to juggle.

I was talking to a colleague from our Business School the other day, who, it turns out, is interested in brain plasticity, and functional MRI studies as part of her work in the Business School in DCU. I mentioned this memory to her, and she was very interested, so I went off to find the paper.

I did a little digging in PubMed, and eventually found two papers dealing with the impact of learning to juggle in older people.

The first looked at the effect of age on the ability of people to learn to juggle. 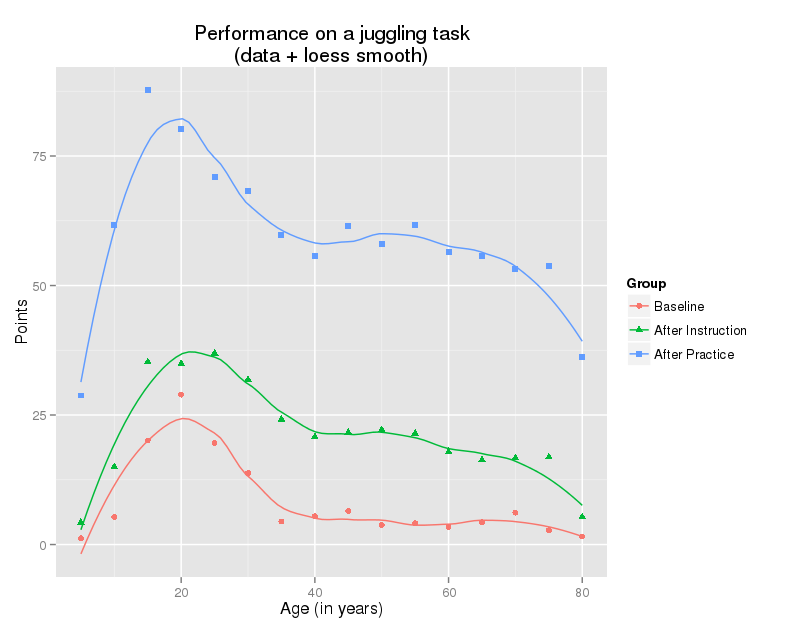 Performance on a juggling task by age, at baseline, after instruction and after practise. (Source – redrawn from Voelcker-Rehage C, Willimczik K, Motor plasticity in a juggling task in older adults-a developmental study. Age Ageing. 2006 Jul;35(4):422-7.PubMed PMID: 16690635.)

This graph shows the main results. There were over 900 people, across a wide range of ages (6 to 89). Each person was scored on video, doing a juggling task, first without instruction – ‘Baseline’, then after verbal instruction ‘After Instruction’, and then after 7 sessions of practise -‘After Practise’. The key finding was that, while people aged 15 to 29 did better than anyone else on this learning task, there was little indication of any further decline in performance with age.

The second paper compared MRI scans over 6 months of 69 older people (mean age 60) who were taught how to juggle. The first scan was a baseline, the second after three months, with (more or less) regular practise, and the third after a further three months, with no structured practise offered. They found that a particular area of the brain, known as the human middle temporal/V5 complex, which apparently plays a central role in the perception of visual motion, increased in size by 3 months into the study, and shrank back again by six months. There other changes in brain structure as well. These were similar to the changes they had found in a group of 20 year olds, in an earlier paper.

What does all this mean? From my perspective the most interesting finding of neuro-scientists over the last 20 years is that the human brain changes over time. Work on brain development in late adolescence and early adult life, has shown that ‘adult’ brain structure is not reached until the mid twenties. This capacity for development continues throughout life. This ties in with the evidence that learning can slow the development of Alzheimer’s disease – literally use it or lose it..

The work on juggling shows that we retain, into old age, the capacity to learn, and that this capacity does not decline much, if at all, with age. We have the capacity to change our brains as well as our minds.