I heard bad news today. I was up at the hostel in Knockree, collecting our daughter, and a few of her friends who had been away with the scouts. Gerry Haugh died at 11:35pm on Saturday March 19th. This will likely mean little to most of you.

When we first met I was 12, and he was 22, just starting as an English teacher in Belvedere. He was keen on, and knowledgeable about, the theatre, and I was in his first ever production in Belvedere. At a net cost of £57, generously provided by Fr. Noel Barber SJ, the then head master, he put on Robert Bolt’s play for children – ‘The Thwarting of Baron Bolligrew’, set in the AV room at the top of what was then the Science wing of the School.

This was the first of exactly 100 productions. Recently he did the ‘Pirates of Penzance’, in which my son played the 43rd pirate on the left. His last production, though we didn’t know it, was his adaptation of the ‘Pickwick Papers’ which opened on March 10th last. At that performance twelve of the original cast of Bolligrew, the 3 Syntax 1 Class of 1974, met up for a meal, the show, and a presentation to Gerry, who was in great form. Very unexpectedly he fell ill last Friday, was brought in to the Mater in a diabetic coma, and died on Saturday night.

What did I get from him? Many tangible things, a love of theatre, cinema, and stagecraft; the fun of long days hill walking in Wickow, and hostelling in Ballinskelligs; my first trips to London and Stratford to see plays; lots of great books, and great poetry; and even, (I think) an A in O-Level English. But I also got lots of intangibles. He was witty, sharp, and honest. He could be tough, when necessary, strict, when needed. He never fell in to the twin traps for young teachers of wanting to be one of the lads, or wanting to be God. He influenced many hundreds of young men for the better. He was a truly good man, an exceptional teacher, and we’ll all miss him. 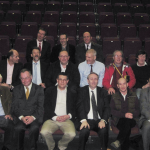 Gerry Haugh, jacket open, tie askew, as usual, with some of the cast of Bolligrew, 100 productions later

Gerard Haugh: GERARD HAUGH, who has died aged 60, was a teacher of English and history at Belvedere College, Dublin, where over the course of four decades he made a lasting impression on successive generations of pupils.

Headmaster Gerry Foley said his sudden death shocked and saddened literally thousands of pupils, past and present, all of whom he encouraged to aspire to excellence.

“Generous and passionate in his belief in the principle ‘Mol an óige agus tiocfaidh sé’, Gerry’s legacy is that he inspired others to be generous, to live life to the full and that in giving, their life would be meaningful and rewarding.”

“A true educationalist” is how one parent described him. “His priority was on the developmental stages of boy to manhood and a wish to nurture a love of the arts, humanities and a philosophy of ‘being’ . . . I always experienced him as operating from a stance of an ‘ethic of care and love’ and a belief that he could get more out of the boys than they ever imagined.”

A former pupil wrote: “Gerry was much more than an English teacher to me, he was a man I could always look up to, and more importantly he was a friend to every student.”

Born in Dublin in 1950, he was one of two children of Desmond and Maire Haugh. At University College Dublin, he was an attentive student of English and history, and an entertaining records secretary of the Literary and Historical Society. He graduated in 1971. That year also he began teaching at Belvedere College, and completed his HDip Ed in 1972.

His interest in and knowledge of theatre led to his first school production, which was Robert Bolt’s play for children The Thwarting of Baron Bolligrew . It was staged in the science wing of the school for a net cost of £57.

Subsequent productions included Guys and Dolls, The History of Tom Jones and The Pirates of Penzance . He celebrated his 100th, and final, production last month. The author’s great-great-grandson, Gerald Dickens, attended his adaptation of The Pickwick Papers . And 12 members of the original cast of Bolligrew turned up at the opening night for a meal, the play and a presentation to the producer.

Gerard Haugh imparted a love of theatre, cinema and stagecraft to his pupils. He led them hill walking in Wicklow and hostelling in Ballinskelligs. He supervised their trips to see plays at Stratford-upon-Avon and London’s West End. Every year he organised the “Block Pull” from Dublin to Galway on behalf of Irish Guide Dogs for the Blind and Temple Street children’s hospital. And he also braved the elements to join pupils for the Christmas sleep-out in aid of Trócaire.

He is remembered as witty, sharp and honest. He could be tough when necessary and strict when required. He never fell into the twin traps of wanting to be “one of the lads”, or assuming to be God. He influenced many hundreds of young men for the better, one of whom now in middle age said: “He was a truly good man, an exceptional teacher and we’ll all miss him.”

He is survived by his sister Maureen, relatives and friends.